Before I became a professional comic book colorist, I was a commercial artist. I did posters, T-shirts, painted signs and trucks, illustrated role-playing games, and anything else I could do to pay the rent.
But even after I began my comic book career, over the years I’ve gotten some interesting side jobs. This one was very original & challenging. A local friend of mine, Padraic Doyle, had the idea that he wanted sandblasted interior art windows in his home. The designs were all based on things he’d seen around his house and property, or on our local coast.
The process was interesting. First we decided on the design, then Padraic got tempered glass, put two layers of contact paper on it, and I cut out the design with an X-acto knife, and Padraic sandblasted it. Finally, we peeled off the contact paper, and he installed them into his walls. It took me a while to learn how to balance the frosted glass image with the clear part of the window. By the 10th window, I had it figured out.
The first window was the dragonfly. The last one was the underwater scene.
It took me a while to get it done (Which Padraic reminds me of on occasion…), but it’s probably the most unique job I’ve ever done.

Padraic also saw a woodpecker chipping away at an abalone shell. 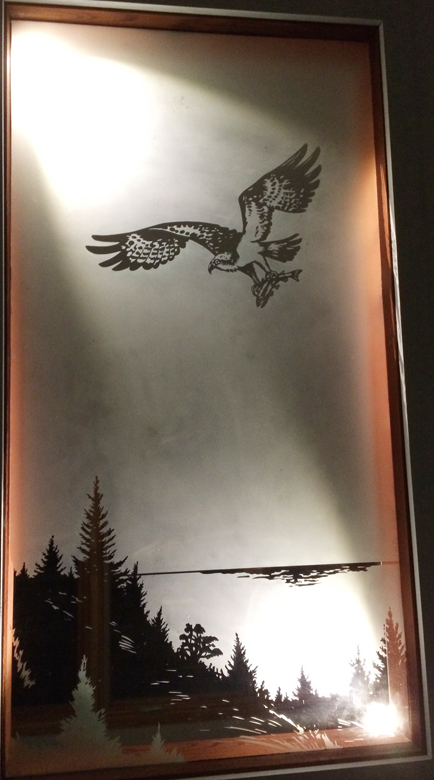 This osprey has a nest in one of his trees. 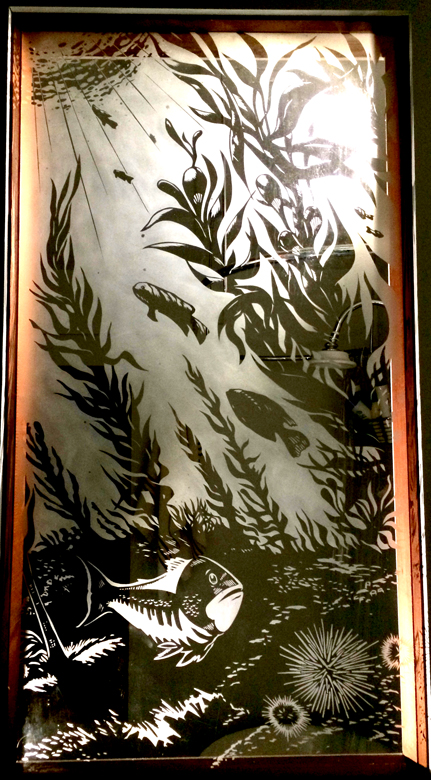 I was really able to get an underwater feel with this last window. However, Padraic let me know that I put in Southern California kelp, instead of the kelp we have off of our coast. That’s what I get for using the internet for reference…