This issue of Spawn was special to me. 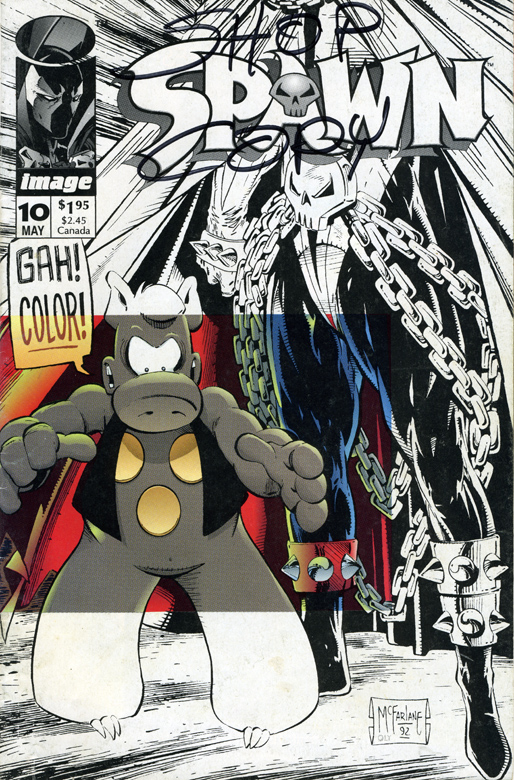 Not only did it have one of my favorite covers of my career, it was the first major appearance of Armature. The issue was written by Dave Sim, and drawn by Spawn’s creator, Todd McFarlane. Its theme was creators’ rights.
One of the reasons Image Comics was formed was that the founding members wanted control and the rights to their own characters. Marvel and DC, the two main publishers at the time, had their stable of characters, but if a creator working for them came up with a new character, it belonged to the Company.
That had always been an issue, but once Image was under way, all the creators owned their own work. Dave Sim, the creator of Cerebus, had been an independent publisher for years once Image came along. Since Todd was tapping people like Alan Moore, Frank Miller & Neil Gaiman to write stories for Spawn, it was a natural for Dave to write an issue.
Cerebus had always been a black & white comic, so it was a great gag to have Cerebus be aghast to see himself in color on the cover. And then, it was a powerful story inside. But for me, it changed everything. 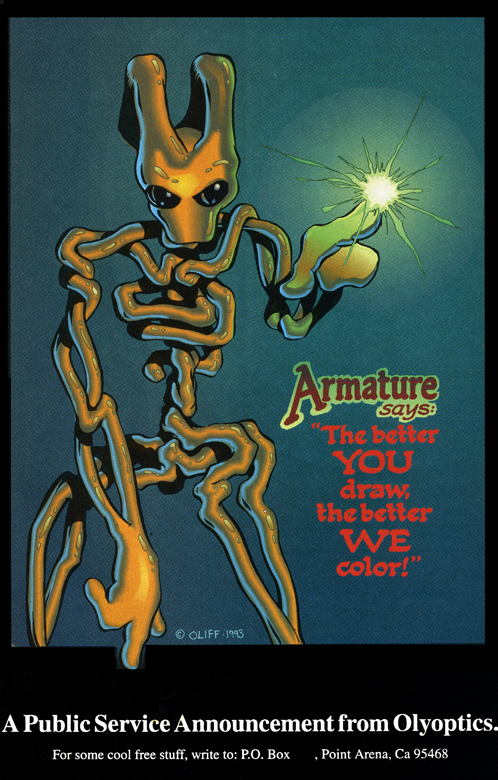 I had this idea to do a public service announcement ad featuring Armature, and Todd let me. That was my “The Better You Draw, the Better We Color” ad that also had a little line at the bottom that said: “For some Cool Free Stuff” write to Olyoptics.
Well, I got over 1,000 letters asking for Cool Free Stuff. I sent out Greylines, Bluelines, Color Guides, Printer Ribbons, and who knows what else? It got to where we became picky about what we sent. For us it was: “The Cooler Your Letter, the Cooler Your Stuff.” Some people were just “Gimme my stuff!” Others sent drawings and great letters. Those people got better stuff.
And along with the stuff, I sent out a little flyer that had a coloring contest. That brought more cool letters. (I’ll show you some of the results of that soon…)
And the hints of a fan base gave me the encouragement to publish Armature. I only got two issues done, but that was the beginning of Armature as a real comic book character. He’s been evolving ever since. And just in case anyone was wondering, that first story will actually be finished.
I just needed to learn how to write and draw a whole lot better…And it’s only taken 20 years.