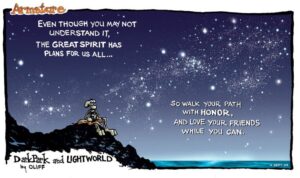 My most clipped Armature strip; many friends say this lived on their refrigerator for years.

Back around 1984, my adopted son, Joaquin Sherman, used to hang out in my studio when I was coloring comics. One day he made a little headless man out of copper wire that sat on my desk for a long time. After staring at it for four months, for some reason, I put some Sculpey (a modeling clay) on his head and suddenly, there he was — Armature.

I started drawing him, and he developed a character. He started out as a bad guy, with “Drops of Doom” in his tubular veins. As it turned out, that didn’t last long. The more I drew him, the cuter he got, and he became a good guy. Those “Drops of Doom” became his Universal Truth Serum, which he uses to reveal the true nature of things. But he only has one word: “Gleep,” so he can’t talk about what he discovers. That’s where his talking dog pal, Redgy, translates for him.