Two of the guys I met at my first San Diego Comic-Con were Gary Winnick & Frank Cirocco. (In the lobby of the El Cortez Hotel, along with Brent Anderson & Tony Salmons…) They were a pair of South Bay (South of San Francisco, that is…) artists who produced a really cool fanzine called Venture. Their ‘zine was almost a professional fanzine like Wally Wood’s Witzend.
Venture #5 had a cover by Neal Adams, a back cover by Alex Nino, & art by Jeff Jones with Tony Salmons inks, Brent Anderson, Steve Leialoha, Carl Potts, letters by Tom Orzechowski & my first printed full-color work. (I’d say there’s a little comic history in that fanzine.)

I started my coloring career doing Barry Windsor Smith Tuppenny Conan portfolios for friends, & coloring the original art on a Neal Adams Green Lantern page. (That’s a story for down the road…) But my first published full-color job was this Neal Adams cover.

In 1975, I used Dr. Martin’s dyes in my airbrush & water-based markers (Marvy Markers). It turned out they both worked well on photostats. Dr. Martin’s dyes were a popular method of coloring color guides for many years in the comic industry. Most (If not all…) comic book colorists at Marvel & DC had a set of Dr. Martin’s dyes that they could use to achieve the 64 colors that the Big Dot Flat color system allowed.
Dr. Martin’s also flowed easily through an airbrush. I used them for that. Dr. Martin’s were rich, beautiful colors, but they had a couple of problems. First, they tend to fade over time. And if you put them in the direct sunlight, forget it, they’re gone.
Second, the crystalline structure of the pigment tended to over-saturate when shot for full color, so it was unpredictable.
Above is the 34-year old printed cover & below, the faded original photostat that it was shot from. 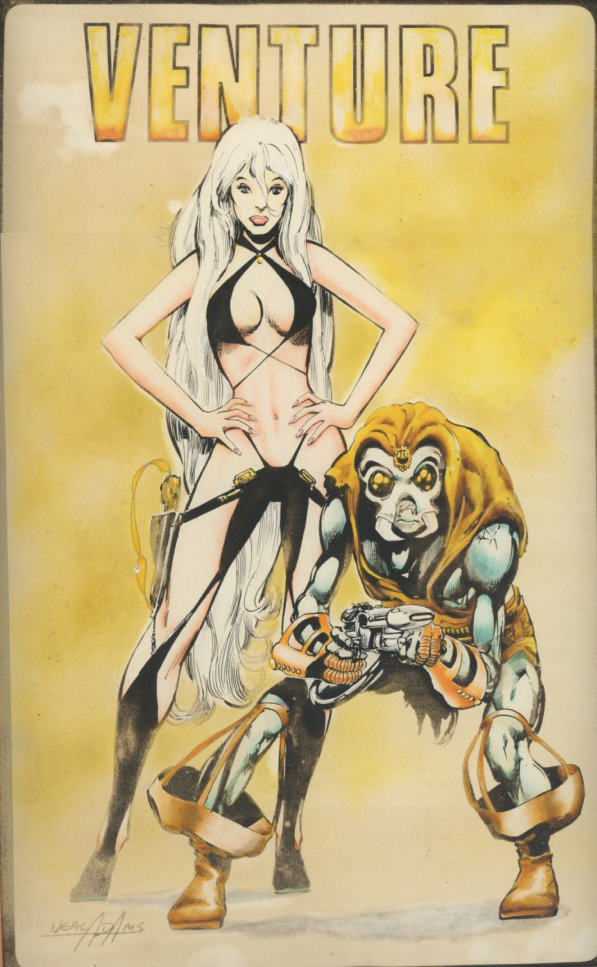 The original doesn’t look so good now, but man, it was fun to color at the time. Neal Adams was the first big artist on my coloring bucket list, and I only got to color him one other time. But, one never knows…