Every comic book professional (with a few exceptions) started out as a fan with some talent and some dreams. If they put in their time, did the 10,000 drawings, and get a little bit lucky, those dreams can come true.
Years ago, I came up with a little game I call:
Comic Book Algebra

It’s actually just basic addition…It starts with a Special Comic Book (Your first one, or the one that inspired you). Then you add some Influence (A teacher, mentor, editor, or even tools). And that equals Your Career.

I did it first on my own career back in my “Armature Says” Newsletter in 1995. 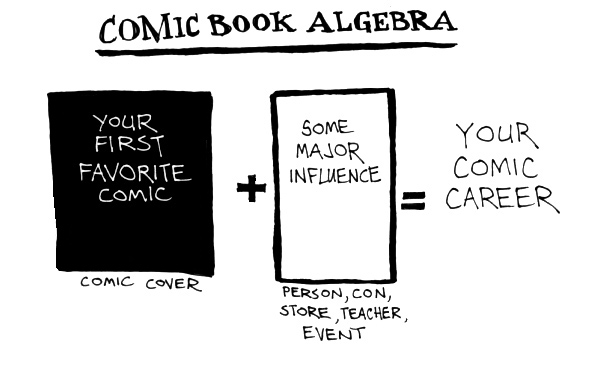 This is the basic Comic Book Algebra equation. It can be more complex, however.

I’ve been surprise by how accurate the results have been as I’ve gone around Artists’ Alleys and asked my friends to play. This one was one of the first I did, and Bernie was kind enough to play. His answers make sense, once you see them.

Bernie said he traded someone for the Haunt of Fear comic, and I can’t remember if it was just Frank Frazetta’s art, or whether he met Frank that was his big influence.            (I’m sure he met him eventually…)

Bernie told me that Graham Ingles and Frank Frazetta’s art was what inspired him to get into being an illustrator. I remember seeing Bernie’s art for the first time in the letters page of either Creepy or Eerie Magazine in the 60’s. The next time I became aware of him was when he was drawing Nightmaster for DC.

The featured image for this was taken at a Halloween party at Bernie’s house in upstate New York in the mid-eighties. He had a great collection of skulls and bones.